When I spotted that green dress in the department store, I know it was perfect.  Just the right shade of Girl Scout green.  I had the honor, once again, to host the Girl Scout Women and Young Women of Distinction Awards. The outfit needs to be right!

Off to the Biltmore I went (one of my favorite places in Phoenix) to join a group of incredible people.

I love this celebration.  The Girl Scouts shine the light on remarkable women and young women of all ages in our community.  Women who are not content with status quo.  They want to make things better.  And they have a game plan to make that happen.

Take for instance, Morgan Serventi from Page, Arizona.  This young woman is stunning. 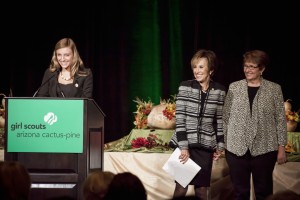 But she clearly is not focused on outer beauty.  She was awarded the Young Woman of Distinction honor for creating a Methane Bio Digester for a village in Kenya.  I know what you’re thinking.  What the heck is that (I didn’t know either until I listened to Morgan – who, by the way, speaks with all the poise and grace of an award winning actress).  The Bio Digester converts methane into fuel that can power a stove.  It makes it possible for village residents to prepare hot meals and boil unsanitary water.  Morgan says her goal is simply to make the world a better place.  Instead of sitting around on Facebook obsessing about herself, this teenager identified a problem — across the globe — and came up with a game plan to try to fix it.

A lot of people say they want to make the world a better place.  The intentions are good.  But without action, even the best intentions, lead to little progress.

It was clear to me that Morgan and the other teenagers who were honored are about action, not words.

Diana Greymountain, also from Page, brought the room to tears when she thanked her family for supporting her in this journey. 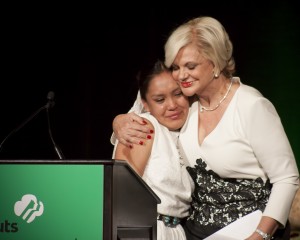 It’s actually quite extraordinary that two teenagers from Page (a town of roughly 7,500) were the Girl Scout standouts for all of Arizona this year.   These girls come from humble homes.  But I watched closely, intently as they interacted with their families, and it was clear that they come from homes with a tremendous foundation of support and love.  That is sorely lacking in many homes today.  Money or not.

Diana, a graceful and lovely Navajo girl, earned her Gold Award for rerouting a local hiking trail in northern Arizona to simplify navigation – while not disturbing the landscape or animals.  She identified a problem, sketched out a plan and took action.  And for her efforts, Diana was invited by the CEO of the Girl Scouts USA to attend the Presidential Medal of Freedom Ceremony at the White House in 2012, and was later awarded the President’s Volunteer Service Award in 2013.

The third beautiful young lady honored is a cancer survivor by the name of  Sheree Lopez. 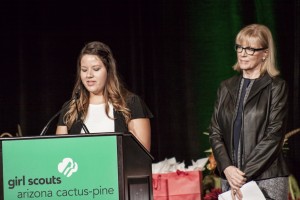 For her Gold Award project, Sheree created a program to help other teens cope with a cancer diagnosis.   Being told you have cancer is horrifying at any age.  But when you are a teenager?  That is unimaginable.  Sheree knows how scary the journey is.  She made it to the other side and she isn’t taking anything for granted.

These young women of distinction not only want to make the world a better place — they are taking action.

Now back to the green dress  – it was a hit. 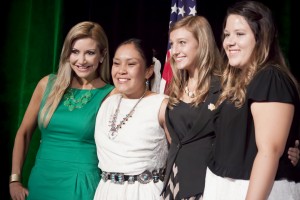 While I didn’t show up in a sash or anything, I wanted them all to see that I was on their team.

I have such respect and admiration for the mission of the Girl Scouts:  Encouraging these girls to see their power and full potential.   With that, they think bigger.  They take action.  They create Bio Digesters.